Why build on peaq? 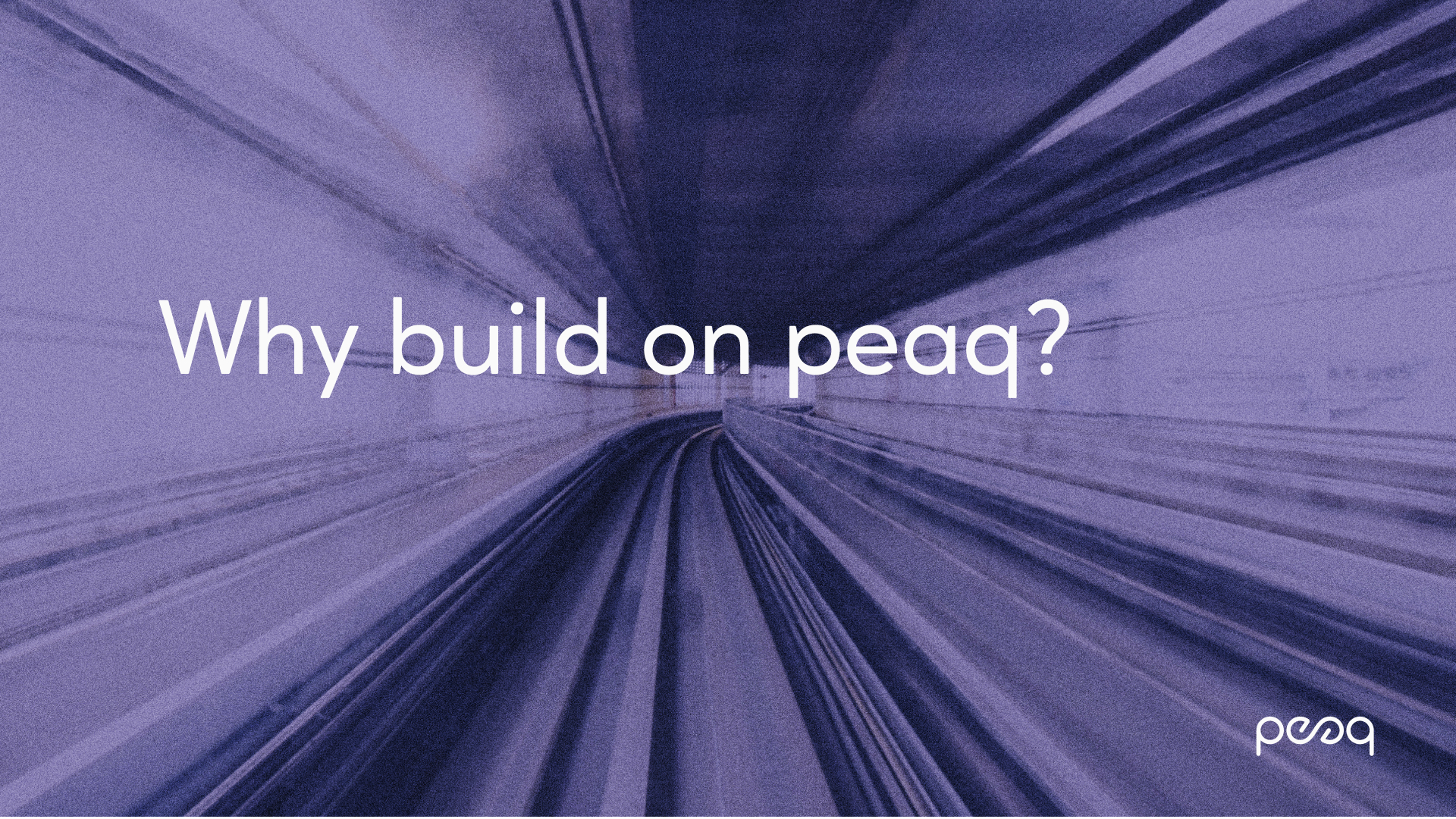 The Internet of Things (IoT) is projected to comprise more than 30 billion devices by 2025, with machines outnumbering humans three to one. Machines are also taking a more active role in the economy, often as much to the detriment of the people who lose their jobs to these machines, as to the benefit of the companies owning the apps and digital infrastructure they run on. As we move into the Economy of Things, the time to build fairer, more inclusive apps is right here and now – but why should you do that on peaq?

peaq’s economic model is designed to align the incentives of all stakeholders in the Economy of Things (EoT) and give them ownership of the economy itself through the ability to vote on the peaq network and receive rewards from it.

As machines running on dApps built on peaq create real-world value, the network leverages machine DeFi to bring extra yields into the ecosystem. A part of the value being created across the network goes to the treasury pool to be distributed to all EoT stakeholders as $PEAQ tokens, which are also used to provide liquidity, deploy new smart contracts and machines, and reward community members for their contributions.

As more machines join the network, more value is being distributed across the entire community, incentivizing further expansion and the onboarding of more machines. This creates a positive reinforcement loop making peaq’s economic model self-sustaining and capable of expanding to accommodate more stakeholders indefinitely.

peaq’s approach to the Economy of Things, whether it comes to mobility or connected wearables, is fundamentally hardware-agnostic. peaq runs as a digital backbone that’s easy for any connected device to integrate with. This enables a smooth overall experience for developers and users, and paves the way for a wide array of possible solutions and applications involving IoT manufacturers and the Web3 ecosystem to be created.

This digital-first strategy makes peaq inherently versatile. Connected devices are already capable of going online and communicating with others, which is the baseline functionality for leveraging a blockchain network.

By creating value and initiating transactions, machines get a whole new level of economic agency, charging both humans and other machines for the services they provide while being able to pay off their own expenses, and even invest their earnings. This Economy of Things will run on a purely digital blockchain-based infrastructure – the peaq network, enabling maximum openness, interoperability and versatility.

peaq works with a vast network of partners, including collaborations with major consortia bringing industry leaders together to hammer out the standards for the EoT. Working with projects such as Mobility Open Blockchain Initiative and GAIA-X’s moveID, peaq helps guide the industry’s arrival into the Web3 era and develops its own software in compliance with these standards – the standards set to be used by top global companies such as Bosch, Ford, and Renault.

For developers building on peaq, this guarantees their projects will be in compliance with the necessary regulatory frameworks and industry requirements. Builders leveraging peaq for their dApps can make use of its support for consortia standards, such as MOBI Vehicle Identity, without having to put months of work into their integration from scratch. Standardization also means higher interoperability within the larger ecosystem and easy integrations with other protocols within the network.

peaq is pioneering Self-Sovereign Machine Identities (SSMIs) granting developers a crucial tool for enabling machines to identify one another and securely transact, peer-to-peer. This function is one of the central pillars for the Economy of Things running on peaq, where humans and machines alike can exchange goods, services, and value through a decentralized, permissionless, and borderless digital infrastructure.

peaq’s compliance also takes off a lot of risk from both the dApp developers and their users, providing them with a high degree of regulatory certainty. It expands the network’s usability and enables it to function as a versatile and reliable backbone for a wide array of EoT use cases.
‍

From the first line of code, peaq was designed with one specific purpose in mind – to power the Economy of Things. While broad enough to cover a wide variety of use cases and sectors, from mobility to wearables and smart power grids, this still amounts to a focused vision zooming in on real-world value and outcomes generated by smart machines. This sharp focus enables peaq to zoom in on its core functionality – enabling the Economy of Things – across the entire stack, fine-tuning its architecture around the needs of this specific ecosystem. While enabling a vast array of use cases in multiple industries and domains, it avoids the problem of stretching too far and too wide, which can result in suboptimal design decisions and a siloed community.

peaq is built with Substrate, the native framework of the Polkadot ecosystem, which puts interoperability at its core. Polkadot’s hub-and-spoke architecture, where multiple parachains are linked with the relay chain, natively enables blockchain networks to communicate with one another, bringing more utility to their users.

Furthermore, peaq’s design brings this approach one step further, as it is also compatible with the Ethereum Virtual Machine (EVM) – the runtime environment for Ethereum’s smart contracts which converts Solidity code into machine-readable binaries. By featuring EVM support, peaq grants developers maximum flexibility to build either in ink! or Solidity and works as the bridge between the Polkadot and the Ethereum ecosystems.

Sharing the abundance in the Age of Automation

The rise of the EoT opens up a wide array of opportunities for transforming the economy, handing more and more dangerous or boring and routine tasks to robots – but it has an obvious downside, too. While automation does not always have to deprive humans of the financial means to exist, more often than not, it does, since the value created by the machines ultimately ends up with the privileged group of their owners. Even if humans upskill themselves, this often takes time, and the rate of advance of technology is only speeding up while our ability to adapt to new jobs remains constant.

Focusing on individual device ownership would do little to alleviate the ills that proliferation of increasingly smart, AI-imbued machines may unleash on the world. It’s easy to imagine robotic manufacturing lines and automated warehouses leaving thousands of manual laborers out of work, but the reality is, automation will cut deeper. Just look at the rise of imagery-generating AIs and imagine the impact they could have on the entire creative industry.

The Economy of Things must represent an entirely new approach to ownership of vehicles, machines, robots and devices. peaq’s Machine NFTs enable fractionalized ownership over machine fleets and the value that they produce, enabling anyone to get a stake in the increasingly automated economy. Inclusivity and community-shared rewards are a crucial part of the tokenomics behind peaq and a central pillar of its vision to make machine-generated abundance more accessible to everyone. In the long run, machines will only grow more intelligent, taking on more and more roles in the economy, and shared ownership is the key to making sure that humans still have a piece of the pie.