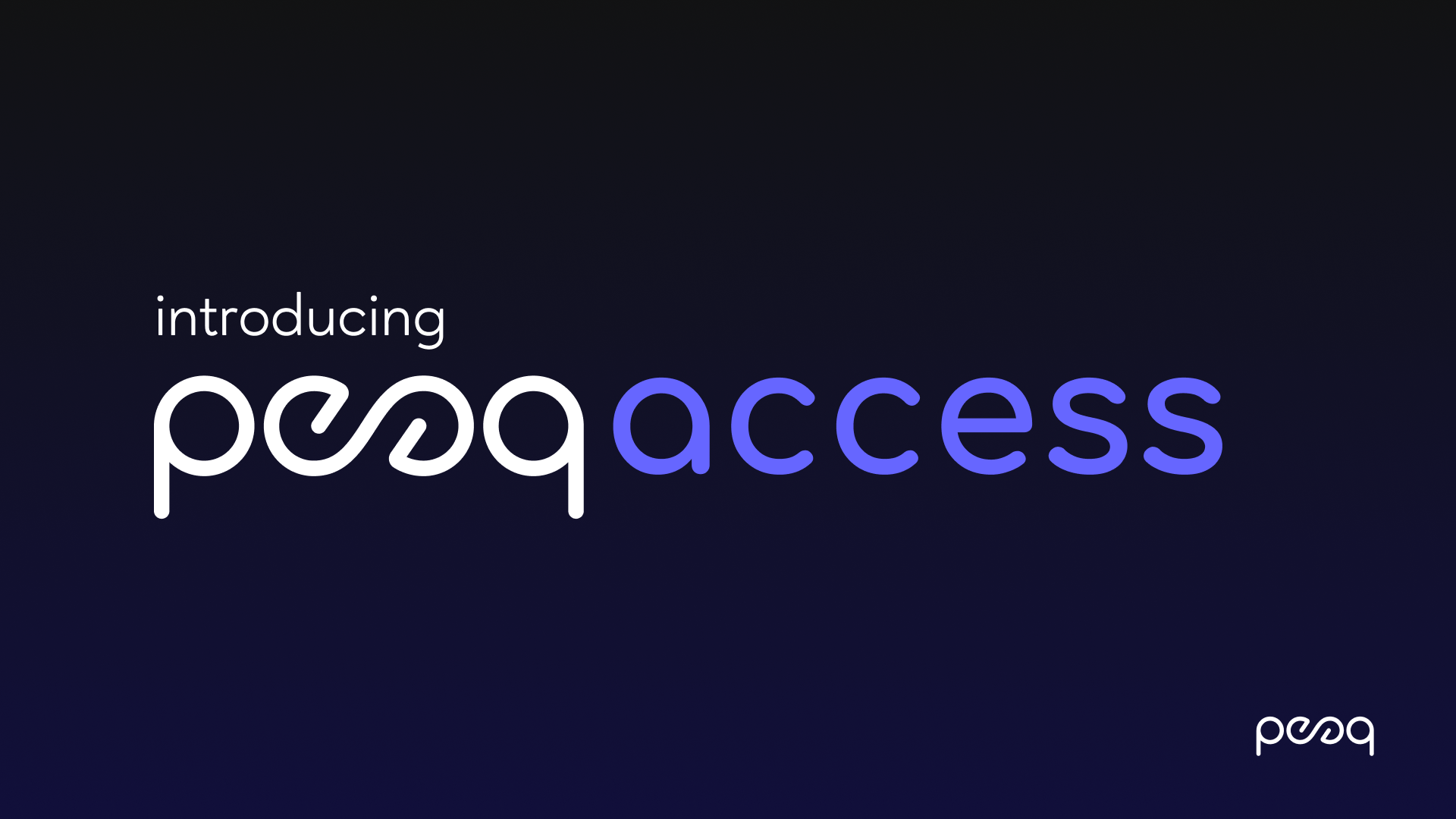 The ability to grant or deny access to things is an integral fabric of society both in the physical and digital world. Whether you want to travel abroad, order dinner online, or even just use the internet, multiple access management systems are involved to make it possible.

This is just as true for humans as it is for machines, vehicles, robots and devices. If a machine wants to provide or render a good or service, the access function is vital. peaq access is this vital function, developed to enable machines to securely provide and render services in the Web3 machine economy, without having to rely on centralized third parties.

This formed part of our extensive R&D phase at peaq where we worked closely with Fortune 100 companies in the machine economy/IoT fields to understand their pain-points and how blockchain technology could help.

We are now releasing our open source peaq access function to enable developers all over the world to leverage the Role-Based Access Control (RBAC) logic to build dApps for machines on the peaq network. ‘Role-Based’ simply means that access is granted upon verification of a machine’s role. To have a role, a machine first needs to be identified. For access to be granted to machines securely, it is therefore of critical importance that machines are properly identified, using the peaq ID function.

peaq access is a secure, highly configurable access framework for machines, designed to enable decentralized access management for machines when interacting with people, other machines, or their general environment. peaq access is designed to enable fine-grained access management to any machine, device, building or zone, without relying on centralized systems. It enables machines and individuals to grant and revoke access to one another in a peer-to-peer manner without having to involve third parties, such as Big Tech firms.

peaq access is the second of three core functions peaq provides to dApp builders. The first we released was peaq ID - Self-Sovereign Identity for Machines, and the third will be peaq pay. These three functions are the vital foundations for any dApp developer anywhere in the world to build a dApp for machines, vehicles, robots and devices on the peaq network.‍

The peaq access smart contract is now available on the peaq GitHub. If you’re a developer interested in leveraging peaq’s core functions to build dApps, get in touch with us or follow us on GitHub. ‍

Intelligent Machines in the Sharing Economy

Two fast-growing trends are particularly interesting where decentralized access control for machines is concerned; the sharing economy and the rise of intelligent machines.

On one hand, our cars, scooters, bikes, houses - and just about everything else - is getting more intelligent thanks to advances in AI. On the other hand, it’s becoming easier and easier to rent them out for other people to use when we don’t need them, mostly via apps. In this way, less machines can serve more people, consuming less resources and often costing less than traditional services.

There’s one Big downside to this though - Big Tech, and other Web2 platforms following similar revenue models.

As of today, it is only possible to share your smart machines with other people via third parties. AirBnb for homes, Uber or Lyft for ride-sharing, WeShare or GetAround for car-sharing, JustPark for parking spaces, Lime for scooters, BoatBound for boats, and so on. These Big Tech apps exist on centralized Web2 networks.

The peaq network provides a decentralized, Web3 alternative for building and hosting apps which allows builders and users alike to bypass these third parties altogether. peaq enables people to build decentralized applications (dApps) instead of apps. dApps for these same use cases without the corporate middlemen that charge high fees, centralize control and hoover up your data.

Whether you want to rent your car, scooter, bike, house or anything else, peaq access is one of three core functionalities that enables you to do this on a decentralized, peer-to-peer basis. peaq is providing the peaq access function as one of three core functions for developers and entrepreneurs to build with so that every dApp built on peaq can benefit from this paradigm-shift.

As a user of dApps on peaq, you’ll be able to earn more for sharing your vehicles, machines and devices than you would with traditional Web2 apps, while also being able to directly vote on how the dApps are run. With Machine NFTs, you can also be a part owner of the entire machine economy, too, earning as the economy as a whole grows.

The peaq network enables a people-powered gig economy - and peaq access is one of three core functionalities enabling this.

Alice owns a car that she wants to make available for rent whenever she's not using it. She isn’t always home to check the renter’s documents, handover the keys and collect the rental fee. She could use a paid service but she’s unsure how often she’ll rent out her car and doesn’t want to pay the high fees.

On peaq, Alice can offer her car via a Vehicle Sharing dApp. People can rent Alice’s car whenever it's available, pay Alice directly, and not have to go through any third parties. This is possible for all kinds of rental vehicles and machines, and in the future will enable autonomous cars to seamlessly and efficiently function as robo-taxis and autonomous delivery vehicles.‍

More details on the vehicle sharing use case can be found here: https://docs.peaq.io/build/eot-solutions-and-use-cases/vehicle-sharing.
If you’re interested in building this dApp, please feel free to reach out to us for support.‍

Centralized access control systems have two overarching issues; security and inefficiency. On the security front, centralized systems are vulnerable to hacks, fraud, privacy leaks and data manipulation. In the context of access control, this leads to critical security risks such as unauthorized access to physical and digital access points, as well as user data leaks which cost companies huge amounts of money and damage their reputation.

As for the inefficiency of centralized access control systems, a lot of it can be attributed to fragmentation. As of today, companies use different access management systems for different access points. One for networks, one for doors and locks, one for directories, and so on. These all have to be managed, integrated, monitored and administered per user, per system, and the majority of this is done manually which leads to high costs, delays and human error. On top of that, each individual system is subject to the cybersecurity risks mentioned above.

By shifting access control management onto the blockchain, each action, update and record is stored and recorded on an immutable database as a non-personalised transaction. A fully transparent database leaves no room for hidden actions or unauthorized changes which plague centralized systems. It pushes access control systems to an unprecedented level of speed and security for access control software and hardware providers, the organizations that use the systems and end-users.

peaq access relies on treating the fundamental components of Role Based Access Control, namely; Users, Roles, Groups and Permissions, as peaq IDs, represented by their Decentralized Identity Documents (DID) on the peaq network.

Because the peaq DID already has the required mechanisms defined for establishing trusted relationships, the RBAC smart contract is tasked with taking care of its essential duty; to provide relationships between these IDs, the result of which is to grant or deny access.

The following diagram illustrates this concept;

As per our design, a user (machine or person) can have many Roles and can belong to many groups. Groups can be linked to many Roles as well. Permissions are assigned to Roles and grant access to objects and operations. This means the user can have access to an object or operation either by being assigned a Role or belonging to a group that has been assigned a certain role.

Using the peaq access function, builders of dApps can leverage pre-built logic when developing their dApps and don’t have to worry about creating an RBAC system from scratch. peaq provides the necessary core functions for any Economy of Things dApp to be built fast and easy, so that builders can completely focus on their use case, get it to market faster and have a tangible impact faster.

peaq access enables machines to go places, do things and interact with their environment. It is critical to providing and rendering goods and services in the machine economy. Peaq access sits beside peaq ID and peaq pay, as one of the three core functions that peaq provides, so our community and enterprise partners alike can create decentralized applications (dApps) for the Economy of Things in confidence.

We look forward to seeing how entrepreneurs and developers will use peaq’s functions, network economics and developer tools to power the Economy of Things, dApp by dApp, across all machine domains, and enable a decentralized machine economy that works for the world.

If you’re a developer interested in developing a dApp on peaq, we’d love to hear from you.